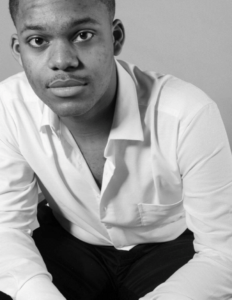 Albert Wash II is a former summer theatre camp attendee, TNT (Teenagers and Theatre) apprenticeship student, and BATC summer camp intern. He is a graduate of Point Park University Conservatory for the Performing Arts program where he earned a Bachelor of Arts degree in Theatre Arts Performance and Practice with a minor in Musical Theatre. Albert is a former Dallas Mayor’s Intern Fellow and in 2015, he was selected to perform on a European tour with the Southwest Children’s Chorus. Select acting credits include Ghost Gun by Olivia Ridley, The Bomb by Lisa Lanford, Gloria by Branden Jacob Jenkins, Pride & Prejudice by Jane Austin, The History Boys by Alan Bennett and The Face of Emmett Till by Mamie Till-Mobley and David Barr III. He is co-founder of Helianthus Annus Theater, an artist collective designed to provide opportunities for BIPOC creatives through new works.