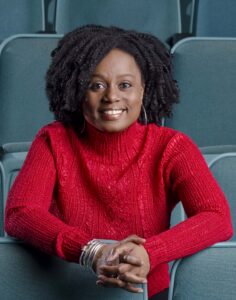 In 2005, TeCo Theatrical Productions, Inc. (dba BATC) was the recipient of a 10,000 square ft., dilapidated building near the Bishop Arts District in Dallas, TX. Wash led her team of board, staff, and community members in securing over $1.2M in funding to renovate the blighted facility. Construction began in 2006 and, despite a downward spiral economy, was complete in 2008. Today, BATC is an intimate 170-seat proscenium theatre with dressing rooms, an art gallery, executive offices, a learning lab, two skyboxes, and an arts business incubator center. The theatre receives critical acclaim and has been nationally recognized for its innovative new play and women’s theatre festival, world-class jazz series, and year-round arts education programs for youth and seniors.

In 2017, Wash was elected to the Dramatists Guild of America Council representing the Southern region, and currently serves on the Steering Committee. Teresa is the recent recipient of many accolades: the National Guild for Community Arts Education’s Milestone Award, Dallas Business Council for the Arts’ Obelisk Award in the category of Visionary Nonprofit Arts Leader, and the Dallas Observer’s MasterMind Award to name a few. She is the co-chair of VisitDallas’ Cultural Tourism Committee, and she serves on the Steering Committee for the Dallas Area Cultural Advocacy Coalition.

Published articles:
A Time of Interrogation – HowlRound, July 26, 2020
The Ugly Truth About Arts Organizations Led by Women of Color – HowlRound, May 9, 2018
How the arts give Dallas an economic boost – Dallas Morning News, May 12, 2017
How the arts can support public safety – Dallas Morning News, April 4, 2017
It’s Time To Give More Women and Playwrights of Color The Spotlight – Role Reboot, May 20, 2016